Well, hello there! How are you all? I've been a busy bee these past couple of months, and that is just fine. That doesn't mean I didn't have any spare time to relax, but truth to be told, instead of blogging and checking up on my favorite blogs, I felt more like reading, which is what this post is about. 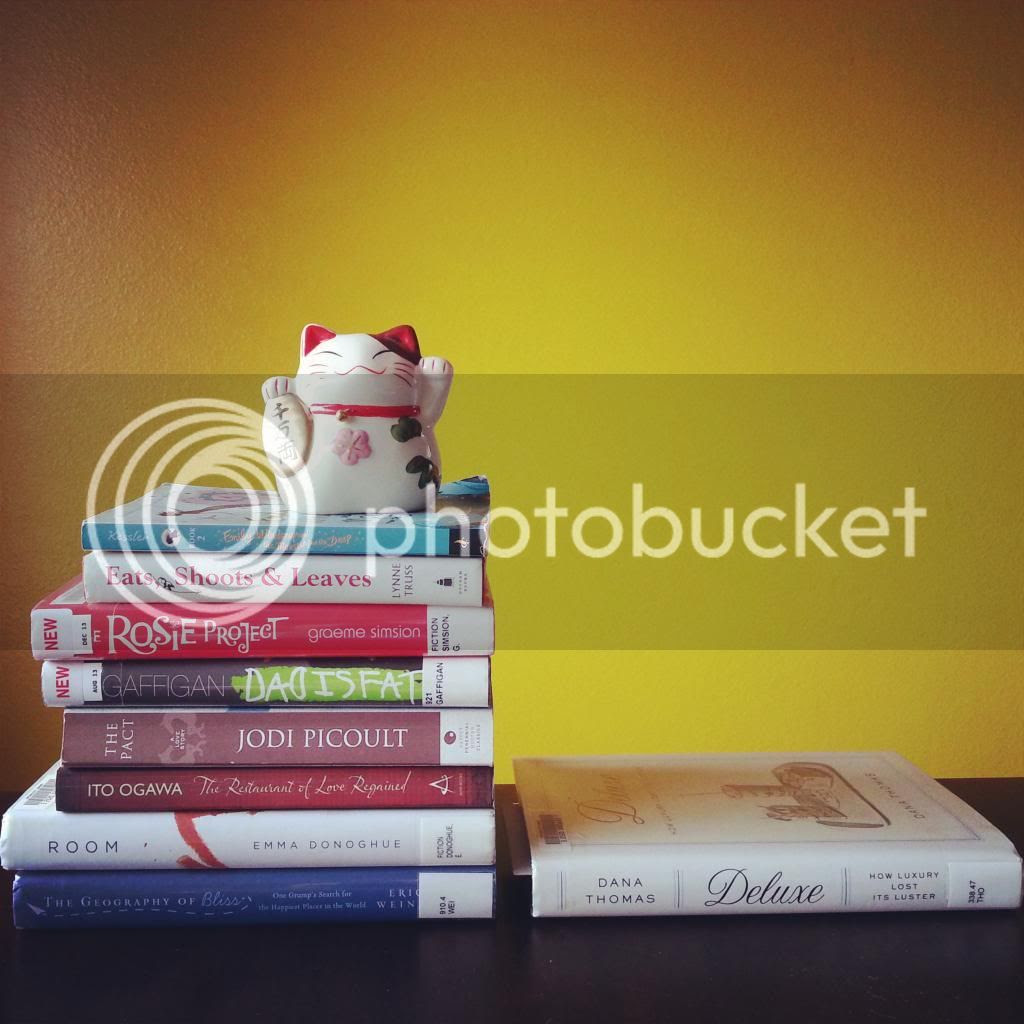 It's been almost exactly 2 months since my first "What I'm reading" post and since then, I've read a few more books, I'm happy to say. The pile on the left in the picture above are the books I read from February till the end of May, and I have finished a few more since then. By the time I took this picture I was reading the one to the right (Deluxe, How Luxury Lost Its Luster), but I gave up on it on page 100; the information about Louis Vuitton and some of the major so-called luxury brands was interesting, but I started feeling grossed out as I kept turning pages. It was certainly not hitting the spot.

The Pact
by Jodi Picoult 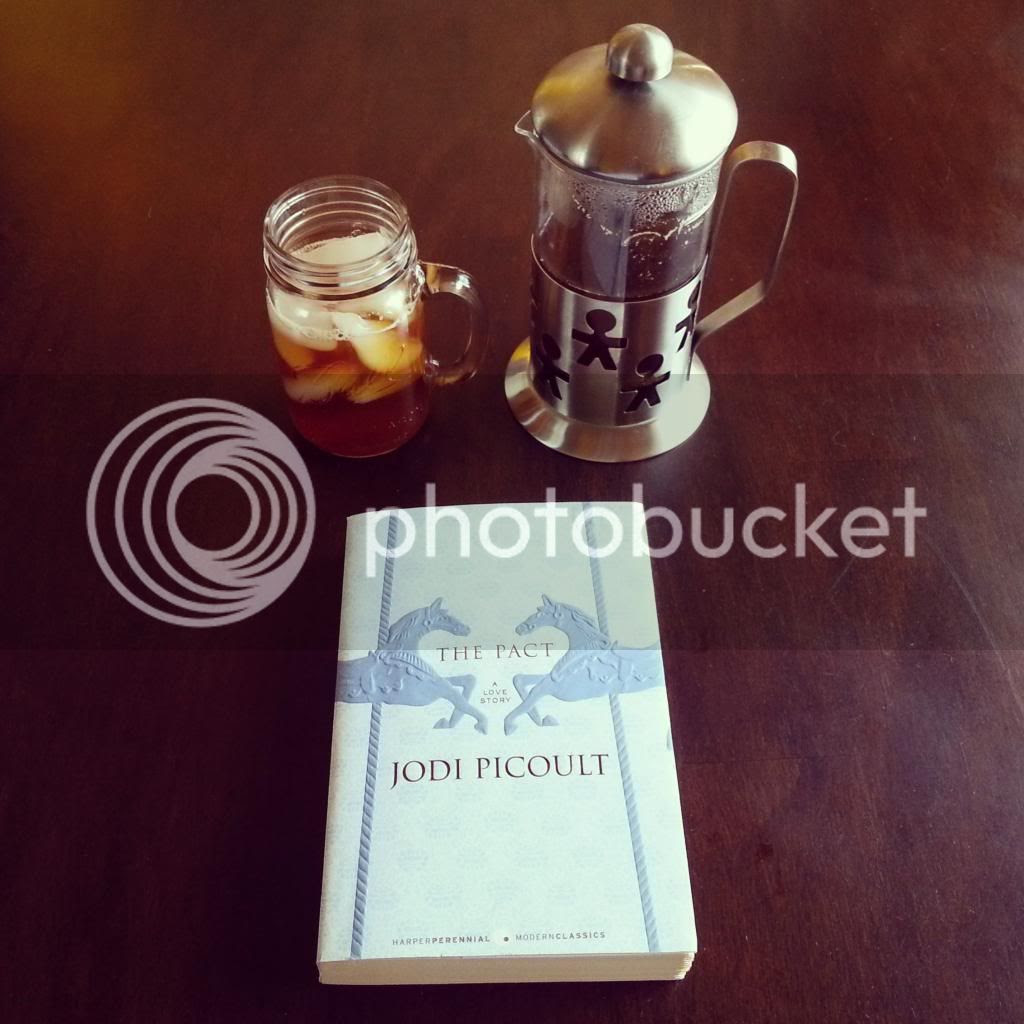 I decided to pick up Jodi Picoult's The Pact, which I had read before but never made it to the end. I only skipped the first chapter since I remembered the story and characters quite well. I'm glad I finally read everything single bit of the story, but I highly doubt I'll read one of her books ever again; there's no time for that when there are so many other books in my to-read list! Man, the story was sad and dragged in a way that wasn't enjoyable. The only aspect that I sort of liked was the present/future dynamics; other than that, I have nothing left to say, it was a totally forgettable book to me.

The Rosie Project
by Graeme Simsion 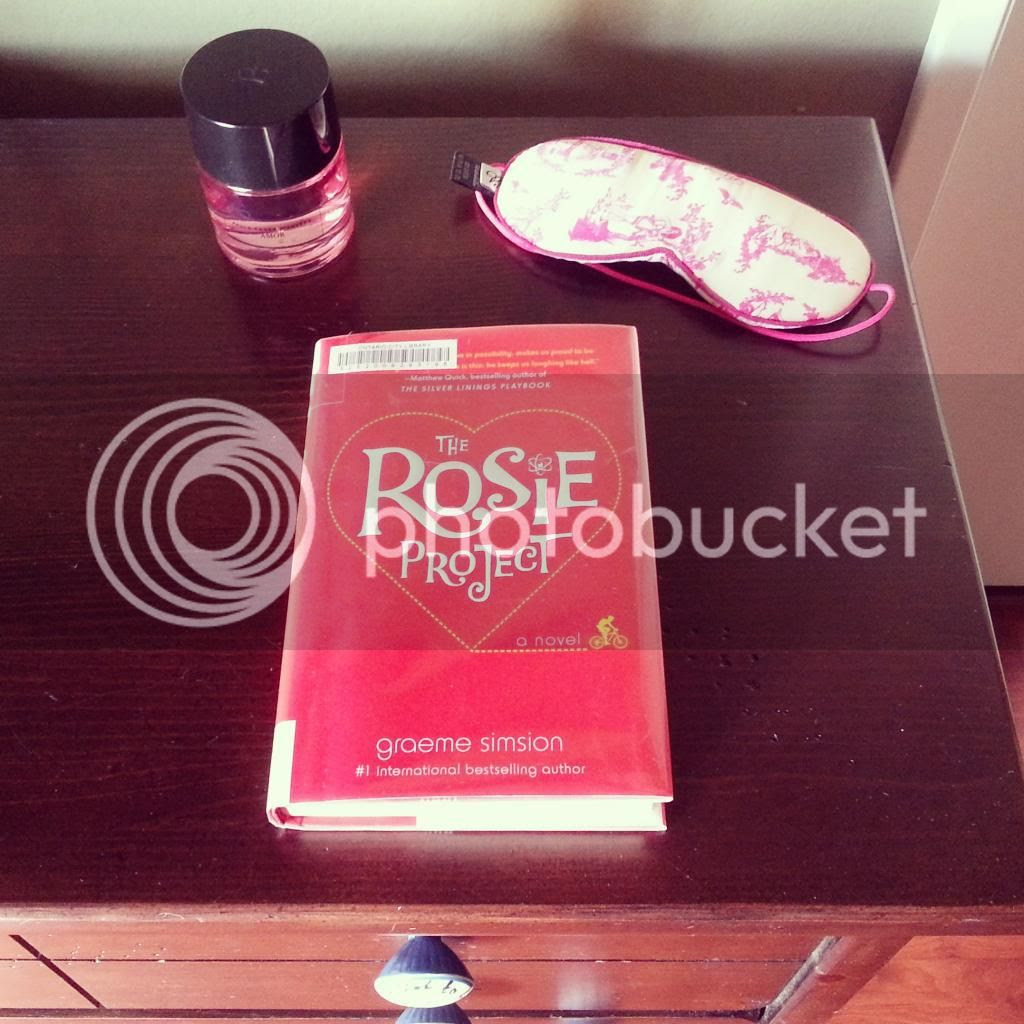 I'm so glad I followed Katrin's advice and checked this one out from my library! In the beginning I found Don Tillman a bit too obnoxious, but he quickly grew on me. He reminded me of an older version of Sheldon Cooper (I can't compare him to anybody else). I truly enjoyed the story and look forward to reading other titles by the author. 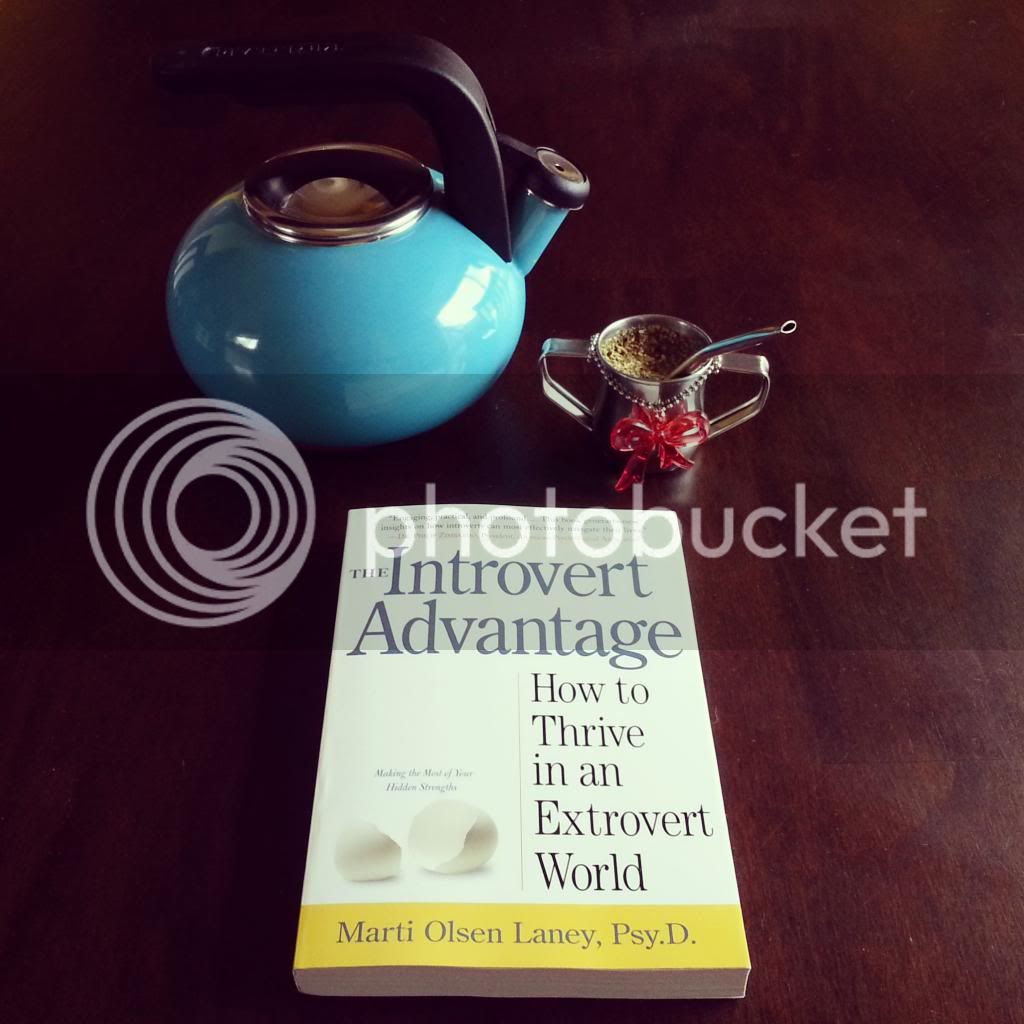 Back to non-fiction. I was undecided whether to buy this one or Quiet, which is a very popular book about the topic. What leaned me towards choosing The Introvert Advantage in the end was the fact that it includes explanations about what chemical processes take place in the brain of an introvert and those involved in an extrovert's brain, which was what I really wanted to know. I read a lot of reviews on Good Reads, a lot of which I feel are not fair at all, but I knew I had to follow my gut and got it anyway. Some people accuse Mrs. Laney of being condescending, but I beg to disagree. It might be because of the fact that English is not my native language, but I just found it easy-to-read and not condescending. Chapter 3 was my absolute favorite and I'm sure I'll be coming back to it in the future. I absolutely recommend it to the introverts out there ;).

The Tipping Point
by Malcolm Gladwell 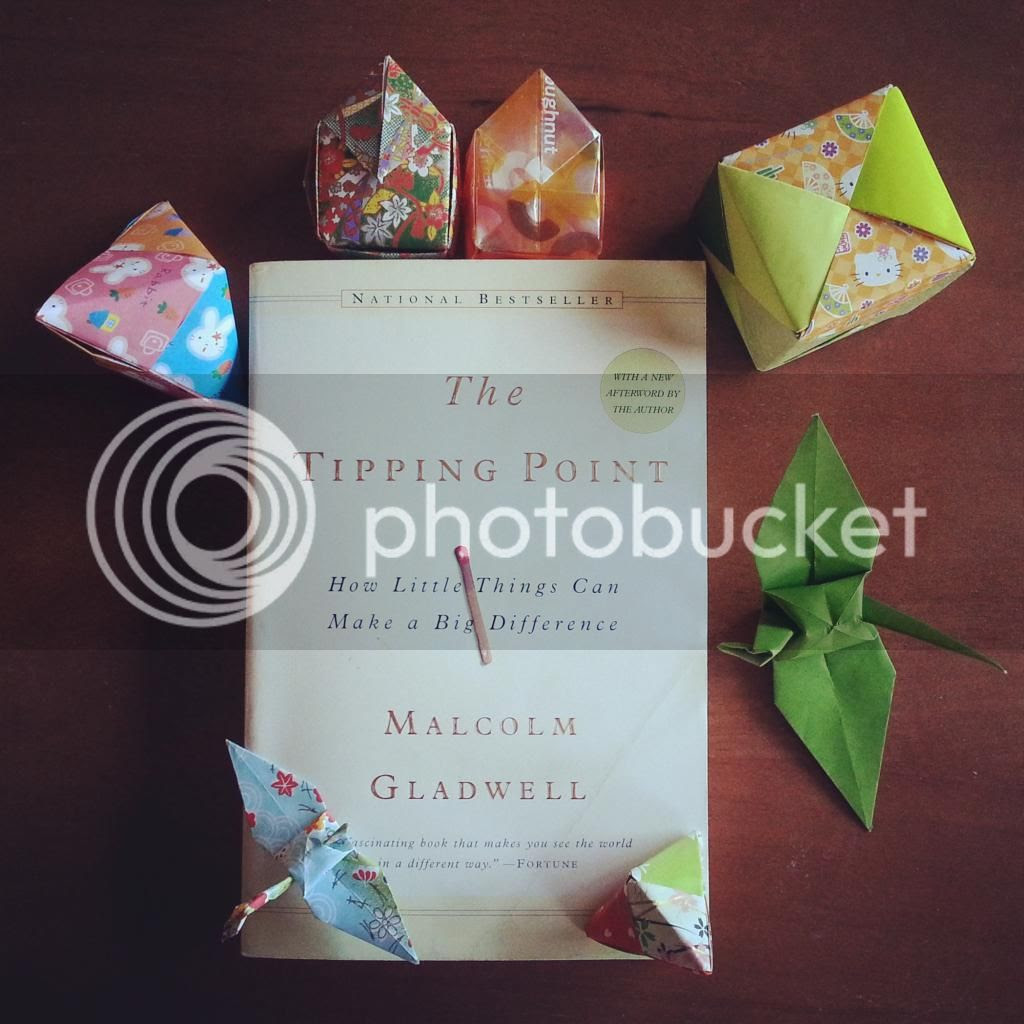 Another wonderful book I think everybody should read. It simply explains how an idea spreads the same way an epidemic breaks out. The examples are clear and varied; I suppose this book is a must-read to those who study marketing, but not necessarily exclusive to them. I now understand what word of mouth really is and I'm pretty sure I'll be able to put some of the information into practice. 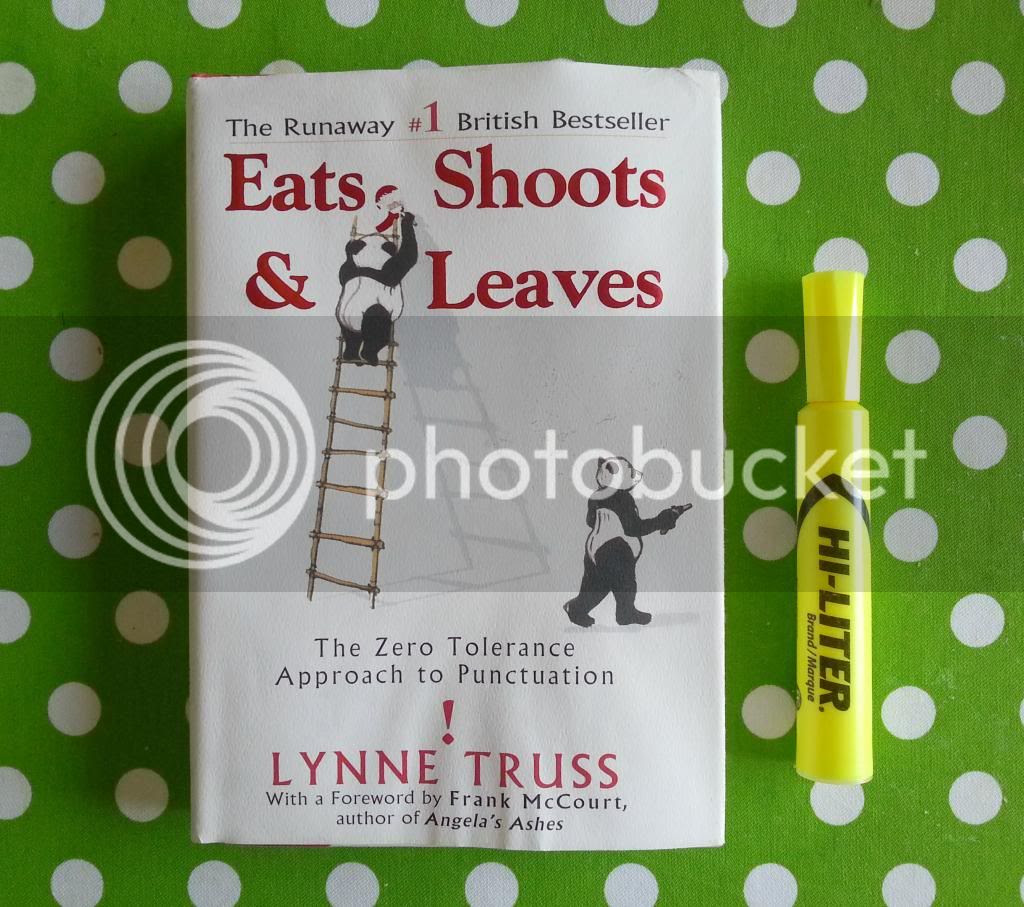 If you studied English and/or English translation chances are you have read this book in college. I came across a brand new looking copy in the book sale at the library I work at and couldn't help buying it. I read it for a second time and found it just as funny. Oh, I forgot to mention it's about punctuation, haha. If you're a writer or just a person who freaks out every time an apostrophe is misused, you'll love Eats, Shoot & Leaves.

The Moaning of Life
by Karl Pilkington 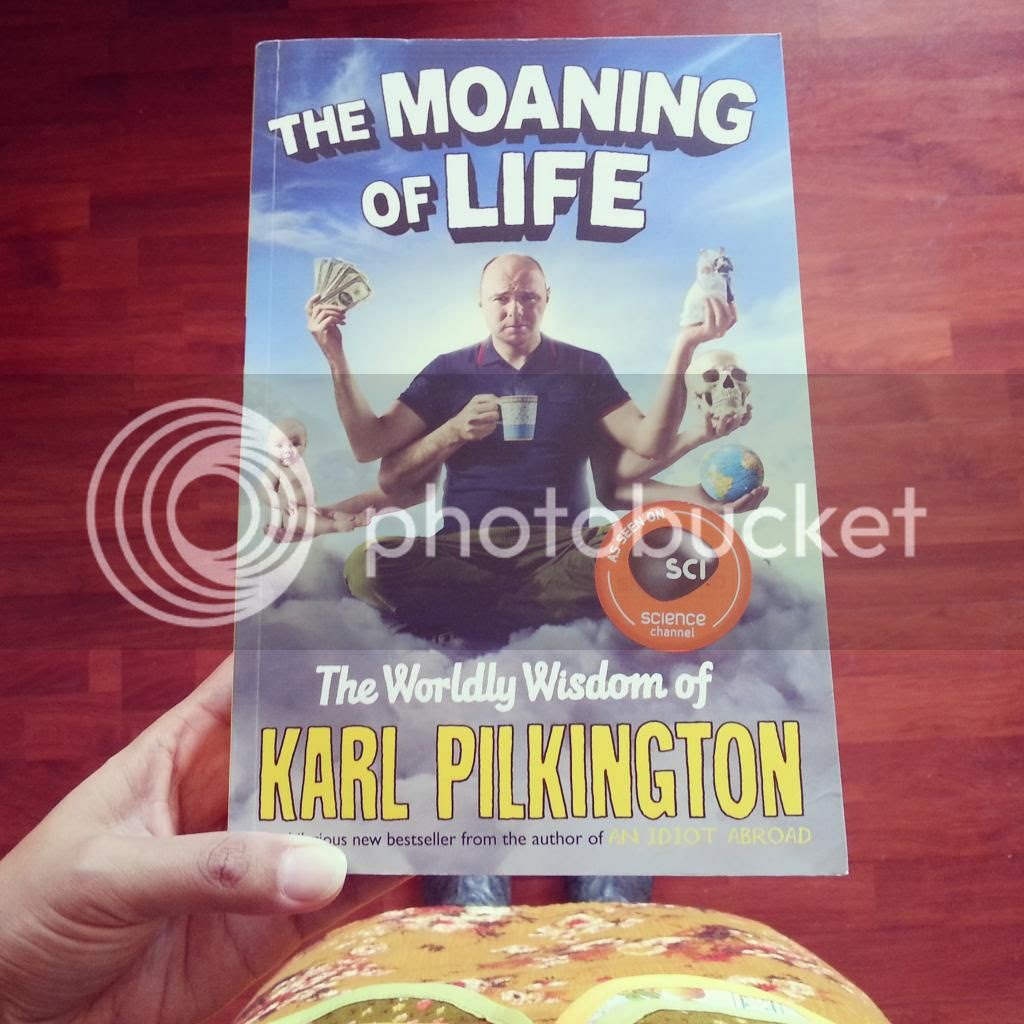 You guys. If you're familiar with Ricky Gervais' Show (his podcast) and some of his latest shows, you sure know who Karl Pilkington is and how hilarious he is indeed. He made laugh hard on An Idiot Abroad and I totally loved him as Dougie in Derek; he even does a cameo in the final episode of Extras. The show The Moaning of Life is not available on Netflix yet and if it never is, I'm sure I'll end up getting the DVDs, but for now, I'm happy going through Karl's written rants on marriage, kids and whatnot. 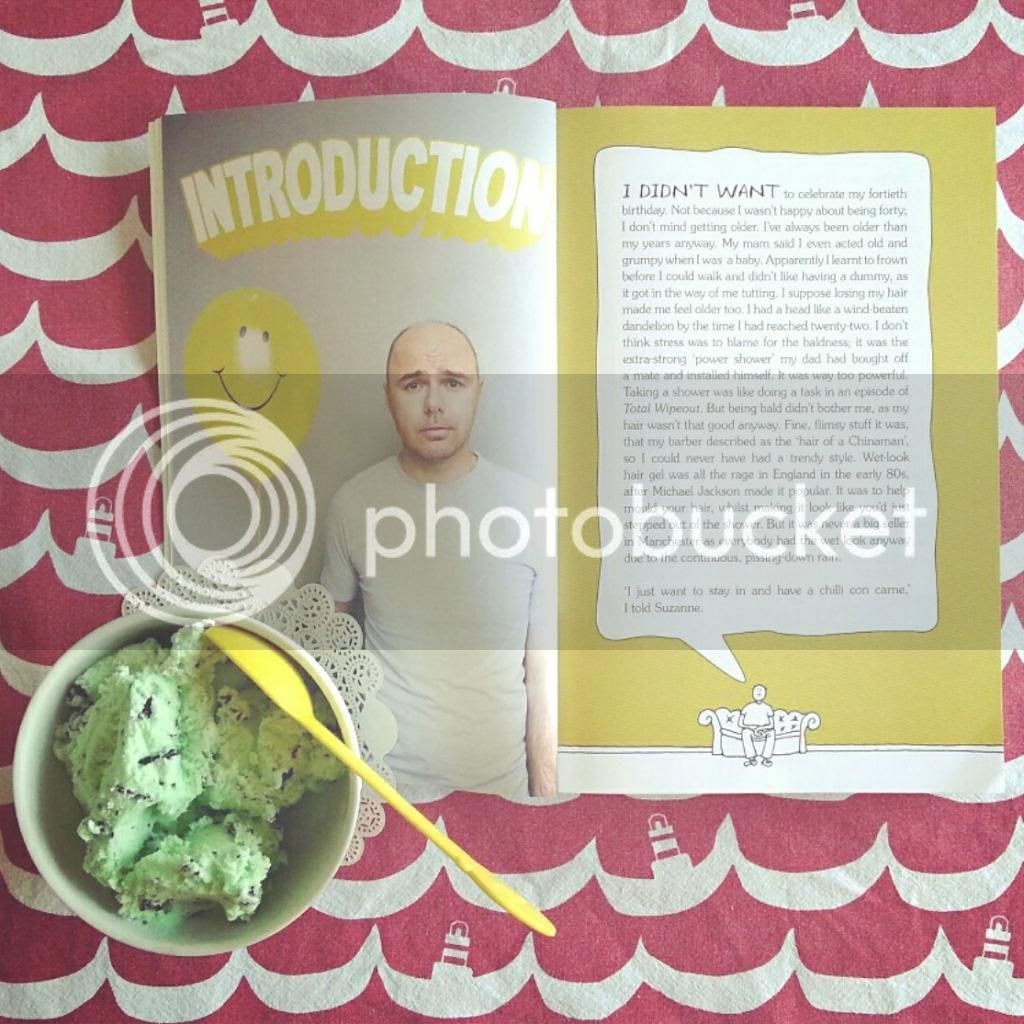 And while we're at it, let me recommend another show by another member of Ricky Gervais' crew, Stephen Merchant. I honestly think he doesn't add much in the podcast or in An Idiot Abroad, but if you liked him in Extras, you definitely need to check out Hello Ladies. Sadly, there won't be a second season :(, but the material that's out there is really good, Stephen Merchant at its best.

Everything is Connected
by Keri Smith 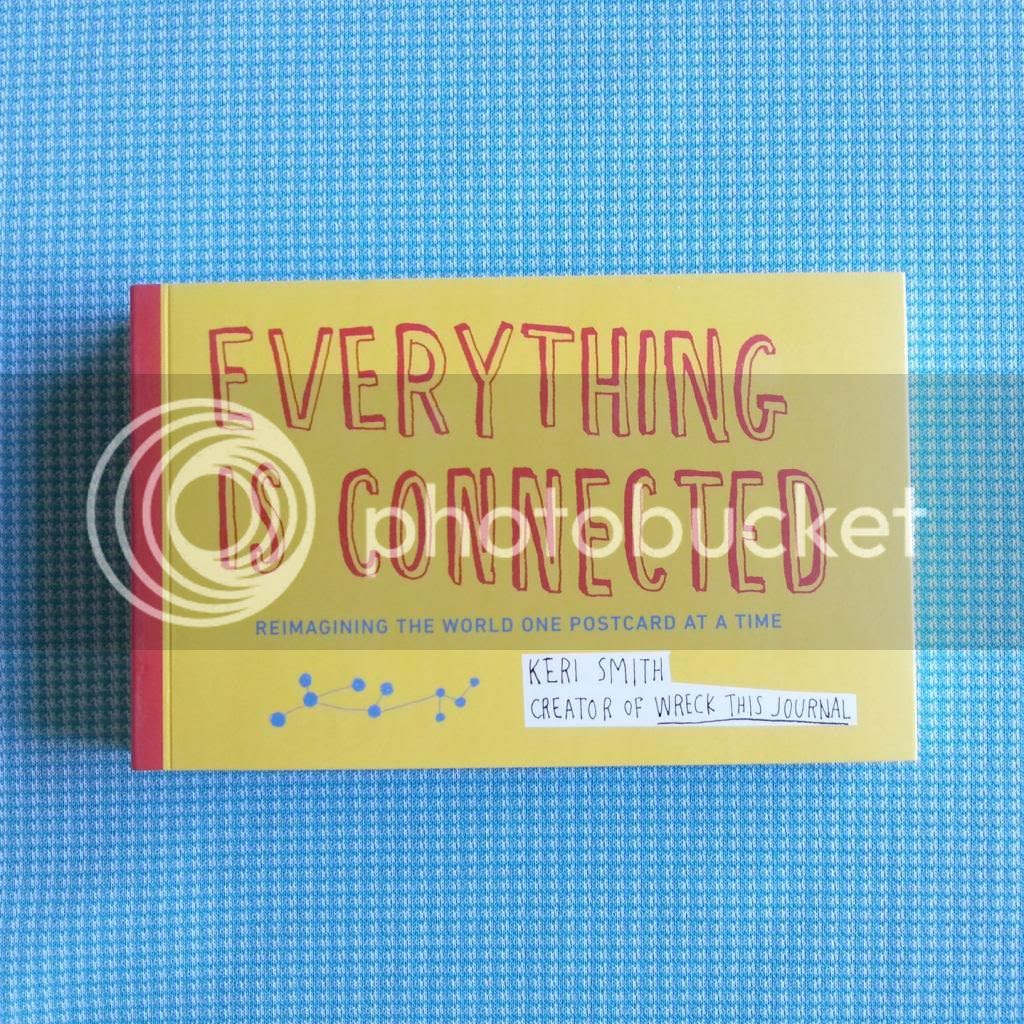 Well, I guess this is a bonus, since it's not an actual book, but a compilation of hands-on postcards. It's my very first Keri Smith experience (for a lack of a better word) and I'm thrilled. I can't wait to share the progress made, but I guess it's going to take some time since it also involves other people. I'm terrible at drawing so her other materials intimidated quite a bit, I think Everything is Connected was the best choice for someone like me who likes collaging, is bad at drawing and loves snail mail. More to come on this in the near future :).

So what are you, guys, currently reading?

Anything you can recommend?

Do you ever read reviews on Good Reads or do you try not to be biased by them?

Hope all is great on your end! ;D

I am so happy you liked the Rosie Project! :) I think there will be a sequel in winter. I love Karl Pilkington, he is hilarious. Love his shows and books! I am currently reading lots of crime novels, I just love them so much. The next book I want to check out is "The Extraordinary Journey of the Fakir who got Trapped in an Ikea Wardrobe". It sounds like fun! Hugs!

These are great reviews! I have been trying to get back into reading but have mostly been reading advice for pursuing a creative career :) I have the book you sent me on my night stand still waiting it's turn. I really should take a break from Twitter at night and read a darn book! Happy to see a post from you now and again! Enjoy your holiday weekend!

I haven't read any of these books that you've blogged about but weirdly I read my first Jodi Picoult book last week (my sisters keeper). Like you I've decided not to bother with her books again. Her topic was an thought provoking one which kept me reading but the characters are not likeable, the argument not a fair one and the ending just a cop out.

Oh, The Introvert Advantage sounds quite interesting. I borrowed Quiet on CD from the library to listen to in the car, but I still haven't popped it in anyway. I'll have to check out the other book, too. :)

I haven't read enough books to even make a recommendation but I just re-read Alice Hoffman's The Ice Queen and it's pretty decent. I think I like the writing more than the storyline which is about a woman who survived a lightning strike.

hope your summer is going well. have a great day.

That is a great selection of books. I love the Rosie Project and love Pilkington but haven't read his book yet. I imagine it must e FULL of insults and British sarcasm tough. :p
Have you read Bill Bryson? He writes some prett amazing and funny stuff.


Hey, Are you interested in exchanging links with my blog?
xxxx

That is a great selection of books. I love the Rosie Project and love Pilkington but haven't read his book yet. I imagine it must e FULL of insults and British sarcasm tough. :p
Have you read Bill Bryson? He writes some prett amazing and funny stuff.


Hey, Are you interested in exchanging links with my blog?
xxxx

PS, That Chinese cat is adorable <3 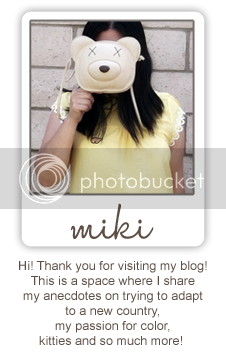 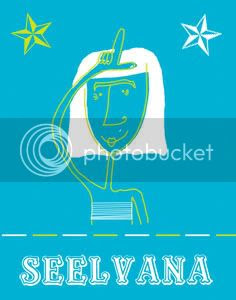