Dimitri's adventures in the USA

I was going to include photos of Dimitri in my previous post, but this little guy has been through so much that I thought he deserved his own post here :D. So this is how we got to America ...

I flew on American Airlines and Dimitri, on Delta, because that's the airline the pet shipping company had recommended. After reading about Jack, the cat that AA lost in NY, I'm so glad Dimitri didn't travel with me! If you are not aware of what happened to Jack, let me tell you briefly: AA found Jack's cage open at JFK airport before being sent to California. The company didn't do anything to try to find him; if it hadn't been for the volunteers at the airport, he would have never been found. After 61 days, Jack was found on Nov 6th 2011 but his malnourishment was so severe, he had to be put to sleep :(. I'm learning more about other pets that got lost during flights thanks to Jack's Facebook page. If you're curious, too, check the link.

Anyway, Dimitri's layover was at Houston and mine, at Dallas. After over 17 hours, he arrived safely in LAX (I arrived at Burbank, btw). David picked me up and then we rushed over to LAX to meet my furry critter. It turned out, they hadn't done the clearance in Texas, so we had to deal with that ourselves right before the office at LAX was about to close, oh, my! It took us about an hour until we were finally allowed in the warehouse where Dimitri was. My poor baby was in his cage in the middle of the warehouse surrounded by noisy forklifts! Grrr!  It was such a relief to grab his cage and see that he was fine :D! From that point on, things happened pretty fast and he adapted without trouble. 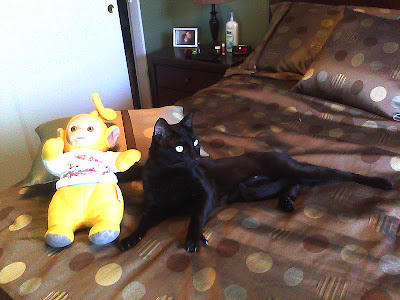 The photo above is one of the first ones we took (with my cell phone, sorry about the quality). He spent his first days under the bed without interacting with Dante; we didn't want him to meet his brother right away because he had never had to live with another kitty.

He had to get used to wearing a collar, which was no problem at all. Our cats' collars have a magnet that serves as a key to the house. We kept Dimitri inside the house the first week  and then slowly tried to teach him how to use the cat door (David used a leash a couple of times, just in case he felt like running away). 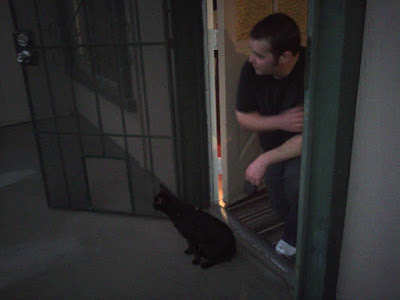 He got used to his new home and neighborhood in no time :).
Look at how skinny he was when we got here! 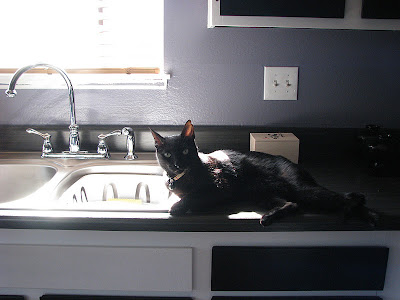 In Argentina, he was diagnosed with kidney failure, so I fed him with special food. Here, I was told he had been misdiagnosed and so we switched him to regular food (same brand). He started putting on weight and looking healthier after that switch :p. 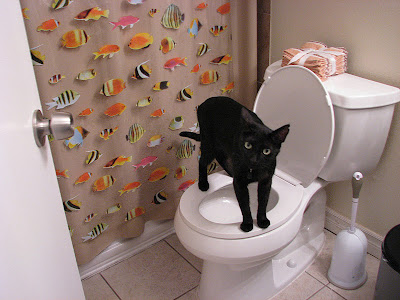 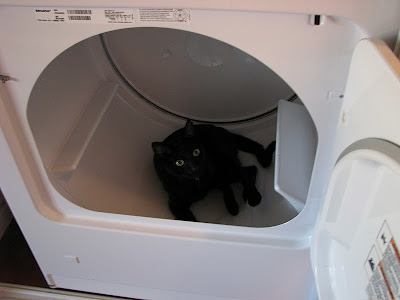 He made himself comfortable very fast, hehe.
We learned that he doesn't like drinking from a bowl of water, so we bought a water fountain that both cats love. 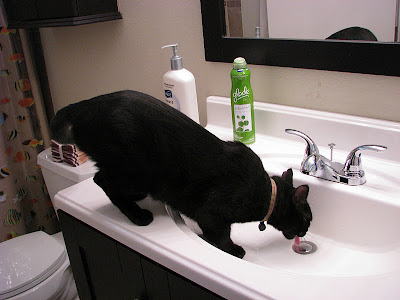 Even though he's not best friends with Dante, at least he puts up with him now and even spends time hanging out with him. 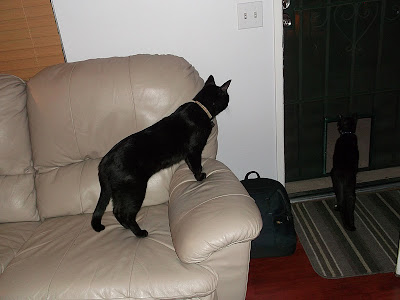 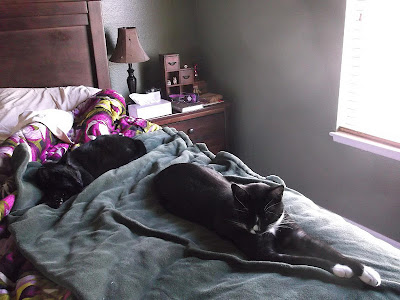 He's got a few new injuries so far: an alleged bb gun shot on his thigh, lots of scratches on his face (you can see his newest addition on his nose here) and ears ... And let's hope we can stop counting!
:/ 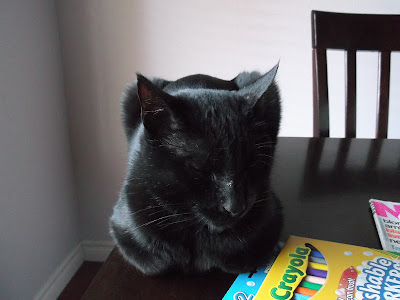 He is a very happy, healthy and spolied cat and I'm so happy to have brought him with me! :D 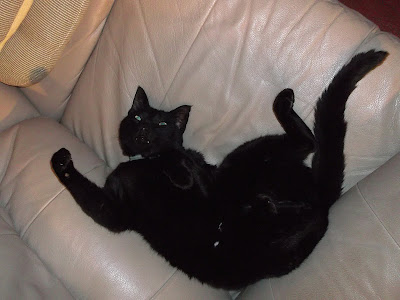 And although he's not the best brother he could be, Dante enjoys watching him and learning new moves from his older brother, hehe. 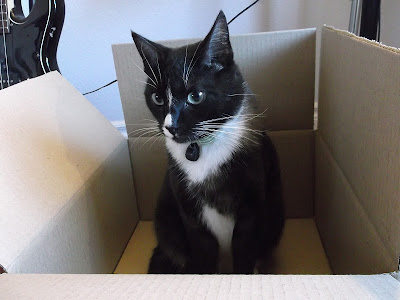 These 2 brats certainly rule the house! :P
Hope you and your pets are getting ready to welcome 2012! :D
High five (and paws)!
Posted by Miki at 5:11 PM

He's adorable! Love pet owners who take their animals with them when making a commitment to move countries- have plans to move to Aussie eventually and have always said I'll take my cat with me despite the cost... and now my fears of airline problems! Yipes.

awww, reading about him in a cage around all those forklifts made me a little sad :( however i'm glad he's safe and happy now. he certainly looks it!!

Gosh, that story of that kitty getting lost in the airport made me so sad! It's so disappointing that the airline took no responsibility. I'm so glad you had a basically fuss free time getting your cat to its new home.
I flew my cats across country (1500kms) to our new home and they were so upset when they arrived. In the warehouse they put cages of cats and dogs side by side and they were all barking and crying and urgh. I hope not to have to fly my cats anywhere again soon. I have their flight cages sitting in my backyard and every time I move them my cats freak out thinking I'm taking them somewhere again! You have such a gorgeous kitty by the way :)

Such a cute kitty! And so many adventures! Wow!

what an ordeal he's been though! such a trooper.

He was SO skinny when he first arrived! It took him no time at all to fatten up like the rest of us Americans. Hehe!

What a sweet story, I'm so happy you were able to bring him with you and you guys could adapt to your new home together! It must be so scary to have to check your pet at the airport!